Are you a Sayer or a Do-er?

If they were, why did I say that I want to do them?

This feeling continued until I left high school and started university where I studied science. It was during my studies that my general practitioner said something to me that really put a fire cracker under me, so to speak. She said, “Brooke, maybe you should start doing things in your life that you really want to do, because after your kidney transplant we don’t know if you will be able to do the same things as before your transplant.”

At the same time I knew one thing. I had to go to Europe. I was very interested in Art and had to see the famous works of Picasso, Van Gough and Da Vinchi that I had been dreaming of since I was a little girl.

University was hard for me. I didn’t even know if it is what I wanted to do. I was an average kid who maybe got below average grades, and taking some time off to go to Europe was one of the best things I did. I had 2 jobs and sometimes worked 14 hour days to save enough money for my trip. I finally had a little drive to achieve something that I wanted.

Europe was an amazing fantastical 3 months where I saw and experienced more then I ever could have dreamed. And something important happened over there. I made the decision that I wanted to finish Uni. The determination and drive I had for saving money to save for Europe had transferred into my studies (FINALY!). 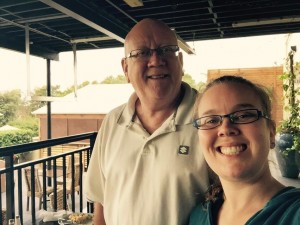 I became a top student, someone who got really good marks and was super proud of myself and happy when I graduated. I achieved something. For me. And it felt great.

So what next? Get a job of course – which I did, which I knew wasn’t the career that I wanted, but that allowed me to tick off things that were on my ever growing list of “things to do.” Having money is a great way to afford flights to pacific islands to scuba dive!

But then things got serious. the tightrope of my health that I was walking was getting more and more unstable. Quick, what else do you want to do with your life? Go to Africa on Safari! Up until this stage I had never EVER felt that I was living with a chronic disease, or that it was impacting on my life in a negative way. That was until the doctors told me that they didn’t want me to go to Africa because they didn’t think my kidneys would be able to handle it, that I would go into complete renal failure and it was very unsafe for that to happen outside Australia.

Boom. All of a sudden my life was changing. I couldn’t stop it, I just had to deal with it. I had been living with kidney disease my whole life and the implications of that was finally becoming my reality. I wasn’t angry. I just accepted it like I had everything else. If anything I was determined. Determined to tick every single damn thing off my list because no one was going to tell me I couldn’t.

My list was, and still is, a big part of my life. Anyone recovering or living with a chronic disease will tell you that its hard sometimes, but for me I don’t dwell on that because everyone has challenges in life, mine are just different to yours. I really believe that how you deal with those challenges says a lot about who you are as a person. Me, I focused on my list to get me through a lot. When I found out my transplantation date I booked to go cage diving with great white sharks. When I nearly died because of an infection after my transplant, I tried my hand at fresh home made pasta or white chocolate and macadamia biscuits because they were on my list of things to do and were small goals that kept me focused on my achievements rather then my illness as I was recovering.

A year and a half after my transplant I climbed Mount Kilimanjaro. Instead of having my kidney transplant limit my life, I used it as an excuse to live. People said I couldn’t, I said I could. And I am still ticking things off my list, both big and small.

I think unfortunately, it takes most people to have a near-death experience to realise that life is for living. I like to think that I had that realisation before my transplant, but it’s definitely ever present now. People still say to me, “wow you’ve done so much!” It honestly surprised me that people are surprised!

They must be the sayers of the world. I am a doer. Which one are you?