In support of DonateLife Week we are pleased to share Alise Minogue’s transplant journey.

I was born with infantile polycystic kidney disease. It was misdiagnosed a number of times before my parents Kim & Dennis took me into Westmead Children’s Hospital. This is when we met Dr Elizabeth Hodgson and Dr Michael Stormon who gave the correct diagnosis which was infantile polycystic kidney disease. I spent years in and out of Westmead Childrens Hospital and had some horrific times. I would vomit blood to the point I would end up in intensive care fighting for life. I had infection after infection including septicaemia with no known reason as to why these kept occurring. I had a number of surgeries just to try and keep me alive, ultimately I needed a kidney transplant. 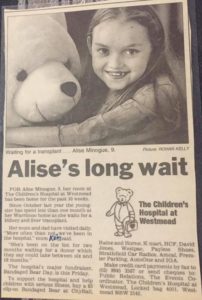 Unfortunately, the years of surgeries, medication & struggle started taking its toll on my organs and my liver started failing. I was then diagnosed with a condition called cholangitis and this primarily became the bigger problem. My body would constantly become immune to different prescribed antibiotics because I would be on them for such long periods due to consistent infections. Then came the phone call and visit from the Doctors that would change our lives forever. I was in Westmead Childrens Hospital and I remember Dr Michael Stormon coming in to tell us the news! They had found a matching organ donor. I had been on the transplant waiting list for 4 years and very ill for 12 years, doctors had taken my parents in prior to the call to advise I wouldn’t have much time left my liver was failing fast and my body was no longer responding to medication. My parents Kim & Dennis and brother Jack were all by my side and it was all systems go over the next 48 hours!! I had the most supportive family throughout the 12 years and they came in as soon as they got the news! My “second dad” Peter Treserder who worked at the millennium foundation and had been supporting us over the last 12 years also rushed to our side also for support. It was the weekend of Penrith Panthers grand final and I am a huge Penrith Panthers fan and the very last thing I said as I was being wheeled into surgery for my 14 hour operation was “go the panthers” and they took out the premiership that year! 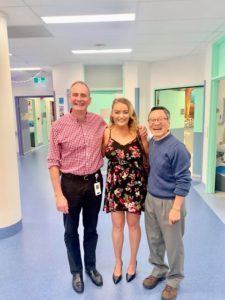 Dr Albert Shun and his team delivered me safely back to ICU and advised the operation went as well as it could have gone. I was Dr Shun’s first double transplant patient and he and the team nailed it! My recovery was phenomenal being able to walk again within just 4 short days… it wasn’t easy I can still feel the pain but it was determination. I made a big cardboard chart that had each day of the month on it and a new goal I wanted to achieve each day. I was discharged from hospital after a double transplant just 14 days later. 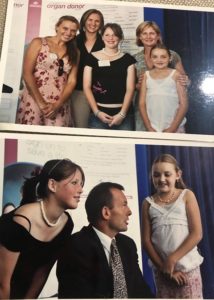 Now at the age of 27 doctors are still in disbelief as my liver and kidney functions are better then their own. I haven’t had any episodes of rejection caused by the liver or kidney. I have unfortunately encountered many other unrelated health issues such as server endometriosis resulting in a number of surgeries over the last 8 years but it all seems so manageable after what I have had to overcome. I missed a huge amount of schooling unable to complete a grade 10 or 12 certificate due to the liver and kidney disease but have been lucky enough since the transplant to live a semi normal life successfully completing a certificate in Hairdressing, Diploma in Childrens Services & currently studying dual Diploma in Business/Leadership & Management.

I have also been accepted into The University of Queensland to study within the medical field. My life now is exceptional now remaining as healthy as I can given the circumstances, and training as much as I can to stay fit and healthy. I don’t waste a second I always make sure I’m working, learning, training or traveling. I have an amazing partner Steve who has also been extremely supportive. I’ve been lucky enough to spend the last 5 years making memories with him. I couldn’t have done any of it without the support of my family, the incredible nurses and doctors, bear cottage, starlight foundation and anyone else involved thank you to all. most importantly the donor family – ❤️ 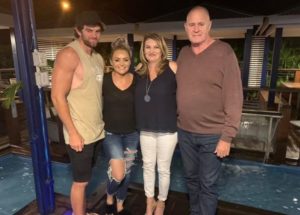 None of this would be possible without the selfless act of the wonderful family allowing their child to be an organ donor.

You could be that person that gives someone else an opportunity at life by becoming a organ donor. By donating your organs you could save multiple lives.