My friend Sarah (Sare) is like a sister to me. We’ve known each other since we were kids, and shared many experiences growing up.

Sare found out she had lupus when she was about 21. She’s been dealing with this awful illness for many years, with incredible grace and fortitude. When she told me that the lupus was attacking her kidneys, and that she’d need to find a donor or go on dialysis, I could see she was struggling with the shocking news.

I’ve seen some family members and friends suffer from cancer and sadly not always make it, and it’s hard feeling helpless in those situations. With Sare, I felt like ‘finally, there’s something I can do to help’.

I did some reading, and found out that being a living kidney donor was pretty low-risk, and that the screening was very thorough. A few ‘what ifs’ did cross my mind – ‘what if one of my boys needs a kidney later on?’ ‘What if something happens to my remaining kidney?’ But I knew that the likelihood of those things happening was very small, and the reality was that Sare needed a kidney. It’s a bit hard to explain, but it just felt like the right thing to do. I felt at peace with my decision. My husband was very supportive too, which was great.

Sare had other loved ones offer to be donors, but unfortunately they were ruled out in the screening process. It was getting fairly urgent, with Sare getting more and more unwell. I went through an intensive screening process over a few months. It was really reassuring getting a clean bill of health.

There were some hiccups along the way, like finding out that Sare and I were not a match, and that we had to go through the paired kidney exchange (PKE). We were very fortunate to find a match via the PKE pretty quickly. One upside of donating to a friend (rather than family) is that Sare had her family support team and I had mine. It must be hard when the donor and recipient are in the same family.

I’d never been in hospital before, except to have the boys, so it was all very new and a bit scary. My sister was an amazing support all through the hospital stay. The staff were lovely, and I particularly remember Dr Stella McGinn popping in to see me one morning a couple of days after the op when I feeling a bit teary. It was just the right moment to drop by and much appreciated.

My surgery was first thing in the morning, with Dr Vass & his team. Because we were going through the PKE, Sare had to wait until very late in the evening for her operation. I used the pain pump button for a while afterwards, but I asked to be taken off it (probably too quickly) as I hate feeling woozy. So I was probably in a bit more pain than if I hadn’t been so stubborn. I remember hobbling to the loo and shower. One nurse in particular was really encouraging me to see Sare but I didn’t feel I could walk that far, to the other side of the ward. Eventually I think Sare came to me! And we had a few wobbly walks around the ward. A physio came and showed me the best way to get out of bed and how to tackle stairs. I think I was in hospital for 5 or 6 nights.

It was so good to get home! I rested a lot, and had heaps of support from family and friends (big shout out to Mum at this time!), with things like taking the boys to school, and meals. The hospital arranged for some home support – like shopping and cleaning, and a home nursing service to check the dressings, which was fantastic. My employer had arranged for me to take special leave, which I very much appreciated. I just took the time to rest and go for short walks, and gradually my energy came back. I went back to work after six weeks and felt like it took about 3 months for my full energy to return. Now, more than a year later, I feel no different than before.

It was wonderful to see Sare marry the love of her life, Tim, at a beautiful ceremony in the Blue Mountains in April. Sare has thanked me many times over, but really, it’s an honour to be able to help her. She’s an amazing person, and the world’s a better place for having her in it. 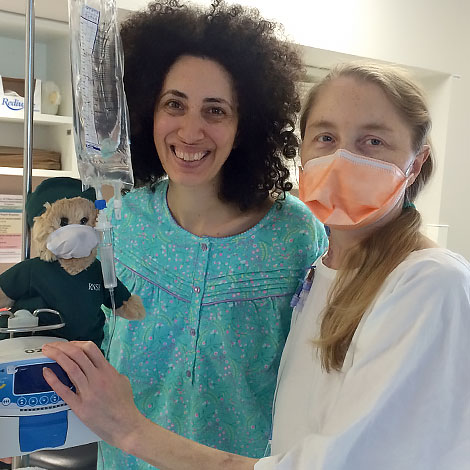 BECOME A MEMBERSUBSCRIBE TO OUR NEWSLETTER
Are you registered as an organ donor? Click for info